The annual Jay Kennedy Scholarship, in memory of the late King Features editor, was funded by an initial $100,000 grant from the Hearst Foundation/King Features Syndicate and additional generous donations from Jerry Scott, Jim Borgman, Patrick McDonnell and many other prominent cartoonists. Submissions are adjudicated by a panel of top cartoonists and an award is given to the best college cartoonist. The recipient is feted at the annual NCS Reuben Awards Convention attended by many of the worldâs leading cartoonists.
Applicants must be college students in the United States, Canada or Mexico that will be in their Junior or Senior year of college during the 2010-2011 academic year. Applicants do not have to be art majors to be eligible for this scholarship.
Along with a completed entry form, applicants are required to send 8 samples of their own cartooning artwork (copies only); noting if and where the work has been published, either in print or on the web. (See application for details.) DO NOT send original artwork. 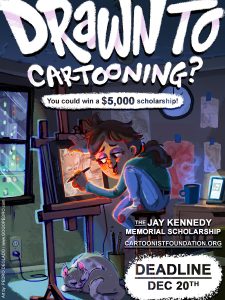